So one could ask: “Why yet another PageObject library?”. After all, there are some very decent gems out there already. This is true. Each of the existing libraries offers certain unique features, but none of them has all. Well, WatirPump - the new kid on the block, has the ambition to make an exception. Let’s take a look at it and find out.

It’s never easy describing code using a natural language. Especially if it’s a foreign one ;) For the in-depth explanation about what WatirPump can do and how it does it I highly recommend reading its README.

There is also a series of specs that demonstrate certain features of the library in a form of a tutorial.

For this article, let’s try to use as little English as possible. Lets let the code speak for itself. 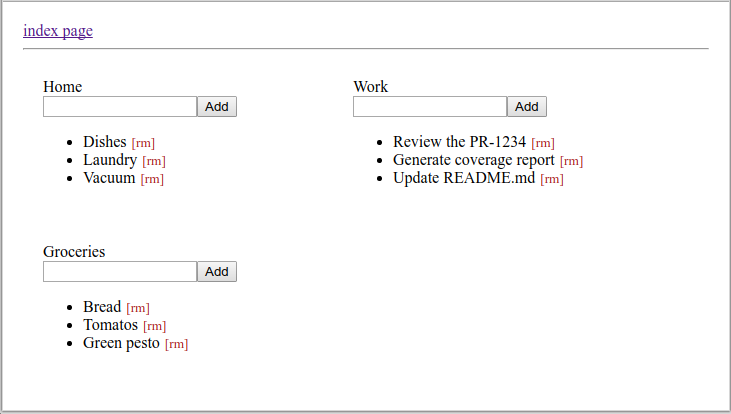 Having properly modeled the ToDoListsPage class the spec will look like this:

Let’s dig into the internals and learn how to build such a nice page API with WatirPump.

As we look at the page it is clear that the first candidate to be extracted into a reusable component is the ToDoList. It contains several elements:

Let’s try to represent this component in a code:

Looks intuitive, however, there are some concepts that might require a few words of explanation.

Concept 0: class macros (some would call it a DSL)

Classes that inherit from WatirPump::Page or WatirPump::Component gain access to a set of powerful class macros that (behind the scenes) generate methods which interact with the webpage. For example, each DOM element can be declared with its own class macro. Just like in plain watir code.

See WatirPump docs to learn more about how one can declare page elements (don’t forget to check out how lambdas could help here). While you read the docs please also grep for root vs browser to learn the difference.

It happens quite often, that there is no point in declaring a “plain” HTML element in the page class. After all an abstract DOM node is rather useless from the perspective of a functional test API. What matters, however, is what the user could do with it. And the user usually needs to perform a certain action:

This is where element action class macros come in: they generate methods that perform actions on the element with given locator.

See the documentation about element action macros for more details.

Declares a collection of components of given class that are located within the current component using the given locator.

So to sum it up: fill_form!(item_name: 'Pineapple') will do self.item_name='Pineapple' ; submit

The more writers the component has, the more work can fill_form do for us.

For more information about form helpers please see the docs.

These are rather self-explanatory. They are here to let us write more expressive code. Like this:

There is one more concept that has been employed in this example. It’s a query class macro and more information about it can be found here.

An item consists of two elements:

When represented as a code they would look like this:

Both of the macros used here have been already discussed.

The highest object in the model hierarchy is the ToDoListsPage. Its declaration doesn’t differ much from the declaration of a component. The main change is the presence of the required uri macro invocation.

Another new contstruct (macro) presented in the listing below is decorate. It is used to, well, decorate given method with some additional behavior. Here, the value returned by method todo_lists will be wrapped by an instance of a CollectionIndexedByTitle class. It is required to replace the default behavior of [] operator: from integer based (like in Array) to  string based (like in Hash). This will provide us with access to certain ToDoLists by their title.

Decorator class for the collection of ToDoLists. As described above, all it does is overriding the default behavior of [] method.

Having the page and component classes in place let’s take another look at API exposed to rspec:

This article showed only a few of the features that WatirPump offers to build maintainable, reusable and elegant Page Object models. For a complete guide please refer to projects README and a tutorial.

In case of ideas for improvement, found bugs or any other questions don’t hesitate to: